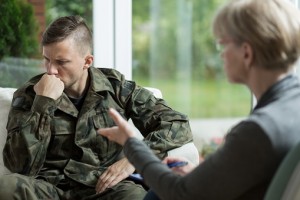 When Staff Sgt. Eric James entered his therapist’s office with his audio recorder, he wasn’t trying to launch an investigation into the Army’s treatment of soldiers with PTSD and traumatic brain injury. He was just looking to protect himself from being kicked out of the Army and a dishonorable discharge with no benefits. Yet his recordings of his curt and dismissive therapist led to an investigation by the Army and another by National Public Radio and Colorado Public Radio.

The Army’s investigation of the recordings led to the reprimand of two Army therapists and a conclusion by the Army that the problem is “not systemic.”

Its research demonstrated that since January 2009, 22,000 soldiers have been discharged from the Army for misconduct after they came back from Iraq and Afghanistan with a mental health or traumatic brain injury diagnosis.

Sgt. Larry Morrison, a 20-year Army veteran and Bronze Star recipient who led three deployments in Afghanistan and Iraq, was informed on the day he was to retire with honor and full benefits that instead he was going to be dismissed for misconduct. Without his benefits, Sgt. Morrison would be without medical insurance or his retirement, and with a dishonorable discharge, finding employment would be difficult. At the time of the investigation, he was working part-time as a retail store security guard pending the Army’s final decision.

As a result of NPR’s investigation, a group of twelve U.S. senators wrote to the Army inspector general calling for an investigation into the discharges of soldiers with mental health and traumatic brain injury diagnoses.

You can find the articles about the NPR investigation here and here.

For a closer-to-home description of the effects of PTSD on war veterans and an example of a positive experience with the VA, read Walter Chihara’s Lahaina News Article, “Decades Later, Vietnam Veterans Trying to Cope with PTSD, Part II.